Guests agree: these stays are highly rated for location, cleanliness, and more.

Little paradise in Old LévisStay in a Century-old apartment in the heart of Old Levis, newly furnished and partly renovated, combining modernity and antique charm. You will live in a 3 ½ on 2 floors with private entrance and electronic lock.

Central, Authentic and UniquePlus Beau et Plus Propre et Moins Cher que l'hôtel !!! This newly and totally renovated appartment is in the trendy UPtown St-Jean-Baptiste neighbourhood: the best place in Quebec city to drop your bags! Totally equipped, it occupies the second floor of this 1845 ancestral house.

Chalet de villégiature près du fleuve"Swiss" type chalet located in a private entrance of 16 chalets and secondary homes in Beaumont. Access to a private beach (rocks, gravels, sand) on the St. Lawrence River with a view of the Ile d'Orléans. Ideal for outdoor vacations and quick access to the greater Quebec City region. You can park the car at the Lévis-Québec ferry in the morning and pick it up when you return from your walk in Old Québec. It only takes 20 minutes to get to the ferry.

Vacation rentals for every style

Get the amount of space that is right for you 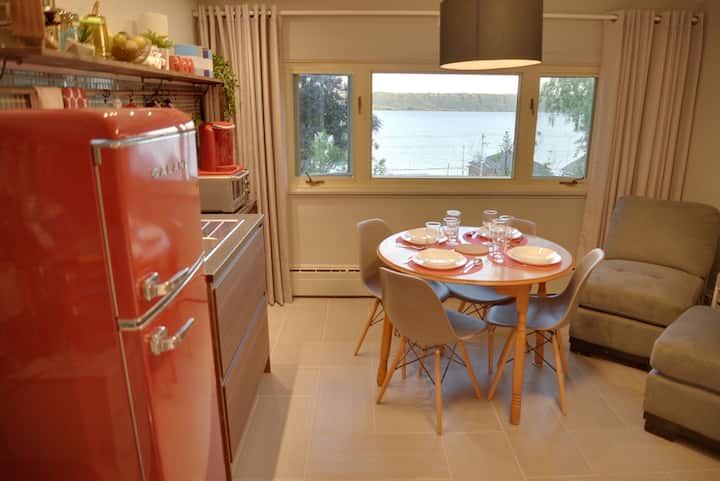 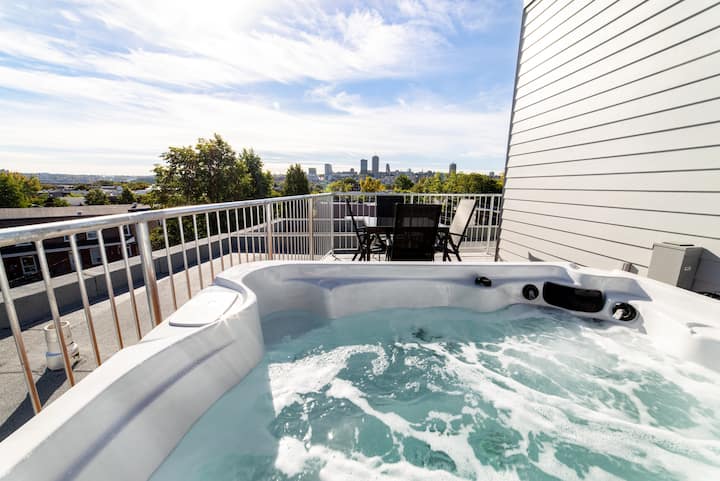 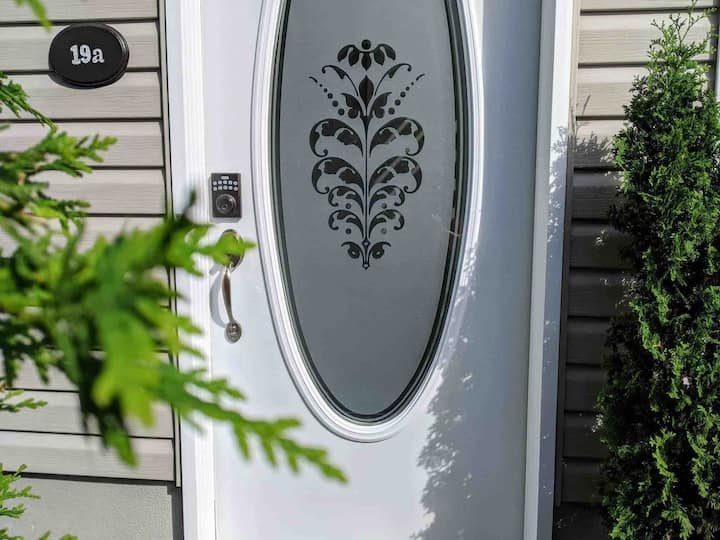 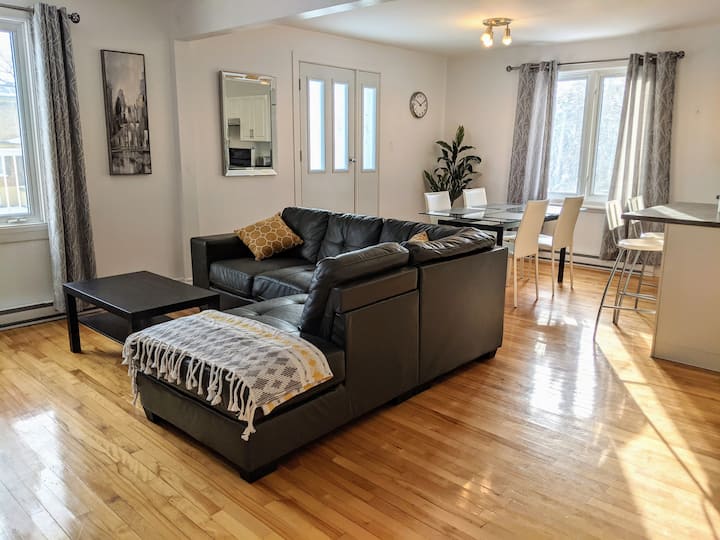 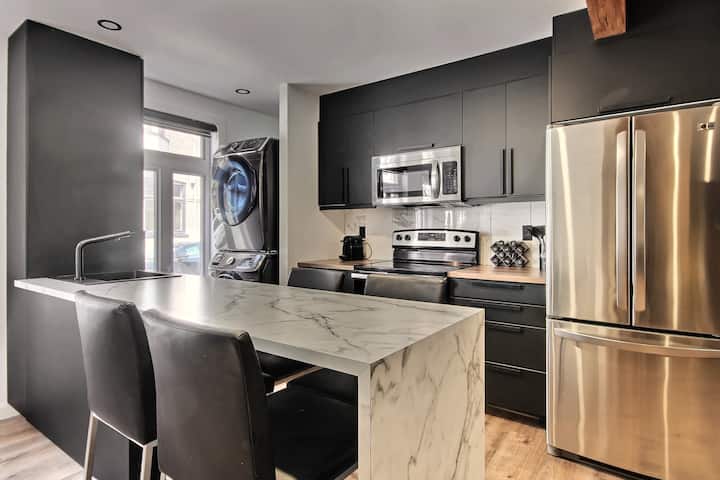 French Canadian landmarks and a beguiling cultural scene blend in this little marvel of a metropolis. At first, it’s the European ambiance of Quebec City’s compact historic core that charms you. This is one of the only walled cities in North America with its centuries-old fortifications still intact. In magical Old Quebec, a UNESCO World Heritage Site, you can chase the past through a romantic maze of cobblestone streets — popping in and out of tiny shops and gazing in awe at icons like the Citadelle, where you can witness the traditional changing of the guard.

Venture outside the colonial district and you’ll encounter eclectic neighborhoods that define the cosmopolitan edge of this provincial capital. You’ll find cafes and markets in Saint-Jean-Baptiste, trending bars and galleries in the revamped Saint‑Roch, and verdant parks for picnicking in laidback La Cité-Limoilou. When you want to play in the outdoors, plenty of the province’s coolest adventures await mere minutes from the city center: think paddling trips on the St. Charles River, farm and vineyard visits on the agrarian Île d'Orléans, and screaming along epic ziplines over the waterfall at Montmorency Falls Park. “C’est le fun,” as the Quebecois say.

How do I get around Quebec City?

Quebec City is less than three hours’ drive from Montreal, a trip you can also take aboard Canada’s VIA trains or on one of the numerous intercity bus services. If you’re flying, Jean-Lesage International Airport (YQB) is about a 20-minute drive to Old Quebec. Once you’re in the center of town, Quebec City’s historic districts and compact neighborhoods are eminently walkable, with most popular sites close by. The city also operates an efficient and modern public bus network, RTC. For a more novel trip, the Old Quebec Funicular is a steep railway connecting the upper and lower sections of the historic core. Or, for a scenic spin, rent a bicycle and hit the paths along the river, which start in the Old Port area.

When is the best time to book a Quebec City vacation rental?

This is a city of festivals, with summer and winter being high times in Quebec City for cultural and culinary celebrations. Summer brings major international music acts to Festival d'été de Québec, the capital’s marquee music event typically hosted in July. Performers dressed in historic garb descend on Old Quebec in August for the New France Festival. Dozens of celebrations dedicated to the culinary, visual, and performing arts mean there’s something happening nearly every weekend from June to September.

During winter, the height of the holiday season in December draws crowds to the German Christmas Market and New Year’s Eve revelries. February’s Quebec Winter Carnival is one of the main attractions on the winter calendar. Fall and spring are noticeably quieter — prime times for exploring the region’s outdoors or strolling postcard-perfect streets without all the foot traffic.

What are the top things to do in Quebec City?

Wandering through the narrow streets of Quartier Petit Champlain — among the oldest commercial districts in North America — feels like stepping into a history book. This compact area of central Quebec City exudes centuries-old French Canadian character in its well-preserved stone buildings with gabled roofs, most filled with small cafes, independent shops, and pubs. The cobblestone Place Royale, lined with restaurants and the continent’s longest-standing church, marks the site of the first French settlement in the region.

Hop aboard a cable car to reach the top of a cliff, where you’ll take in views of the tallest waterfall in the province of Quebec. At 272 feet (82.9 meters), Montmorency Falls stands nearly 100 feet (30 meters) taller than Ontario’s famous Niagara Falls. For a bigger adrenaline rush than snapping pictures of the misty falls, you can speed along a zip line across the cove.

Wrapping around Château Frontenac, the castle-like icon towering over Old Quebec, Terrasse Dufferin is a Victorian-era boardwalk with stellar views. Perched above the St. Lawrence River, it’s a scenic spot for a sunset stroll, when you’re also likely to see a few street performers competing for your attention. Come winter, the terrace turns into a snowy playground, complete with a toboggan slide dating back to the late 19th century.